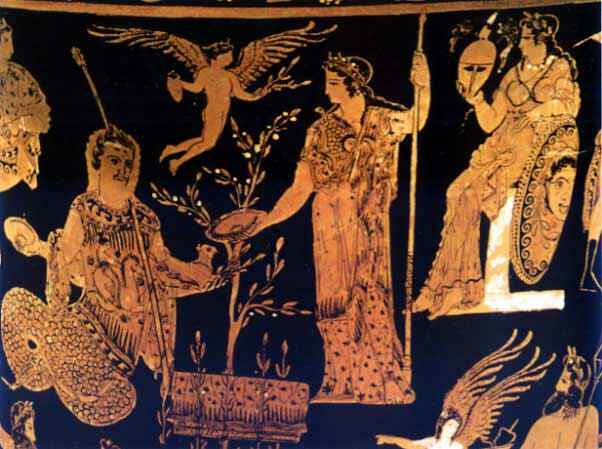 Following on from the last post about Ascended Master Hilarion I want to give a general outline of who Pallas Athena is.  Remember, I mentioned the Masters all having a Retreat located somewhere on our planet over a particular location only in the etheric?  Well, Pallas Athena's retreat is in the Temple of Truth over Crete along with the Ascended Master Hilarion.  She is known as the Goddess of Truth.

Ascended Master Hilarion and Pallas Athena work together along with the other masters of Truth who all congregate at the Temple of Truth to teach us about cosmic law, healing, sacred mathematics and divine geometries and music/sound and the laws of alchemy and how to maintain pure thought on behalf of another ( so very much to do with distant healing abilities).

As one of the teachers of truth she helps all souls who have been disillusioned by the false teachings or rigid dogmas of the true teachings, these souls usually become skeptics, atheists and agnostics not knowing what to believe in.   I don't know her that well actually because I have been more drawn to Hilarion, but she is said to hold the God consciousness of Truth for the Earth.

In Greek mysthology Pallas Athena was considered to be a goddess of wisdom, justice, war strategies and the arts among other things.  Her symbols have been recorded as a spear, the owl and the olive branch all symbolic of the qualities she bestows. Though Athena is a goddess of war strategy, she disliked fighting without purpose and preferred to use wisdom to settle predicaments. The goddess only encouraged fighting for a reasonable cause or to resolve conflict. She emphasises that we should use intuitive wisdom rather than anger or violence. As patron of Athens she fought in the Trojan war on the side of the Achaeans and the city of Athens was of course named after her.

You can find a lot to study on Pallas Athena through Greek mythology but if you need help in the qualities she has mastered and would like some help in standing up for what you believe in then you would do well to call upon her for some help.

I took a journey in 2012 to seek the Temple of Truth in Crete and I will seek out that blog and repost for you in my next writing.  I followed a path that St Paul had traversed and as luck would have it or was it destiny, myself and one of my students did stumble upon the site I believe is where the etheric Temple of Truth is located.........by sheer co-incidence... or was it?

A little more on Pallas Athena along with a Sacred message in the language of Light can be found on this page if you just click here.............
Posted by Christina Ritchie at 6:00 am