Step Aside from the Ego

Step aside from the Ego

So last week I couldn't draw, but then something happened and has continued to happen on a daily basis.  I guess I couldn't draw because I couldn't see, or was it because I got in my own way.  But, the last 10 days I have found myself on an amazing journey. I picked up a pencil ten days ago and to begin with, I still couldn't see, but I noticed a shift in myself that began to show me how to see and from coming to that place of being able to see.  I then shifted today into a greater degree of trust.  All it took was for the iPad to be flat and I would have to try to recall what was in my mind instead of finding the closest image to what was in my mind so I could have a guideline.  Today, I trusted to the next level and said let's see if I can draw by intuition.  I had an image in my mind that had come to me via a vision.  I had a feeling of who it was or around about, so I had sought to see who the vision was online so I had a memory to call upon the energy.  I discovered the image that was in my minds eye was that of de Compe Saint Germain. I decided to go into meditation to see if the image would come forth for me and then I picked up my pencil and drew.  I just drew and a face began to appear and the face was that of de Compe Saint Germain; not the same face as those on Google images but very close.  The difference was that the image I drew appears to be a young version of the same identity.  So, so far I had started with trying to draw as shown in my earlier articles without much success, to copying very basic drawings with varying degrees of improving success, to a combination of copy drawing, to using the image for guidance for proportions and the to finding my images were beginning to take on their own flow, to finally what I can call a relatively successful intuited drawing.


Getting out of my own way

Yesterday my image of Serapis Bey was drawn with the guideline of an image I have known for a long time, but I was very pleased with the energy I captured in his face.  I've worked closely with Serapis for many years so it was a really special feeling for me to put him on paper as his energy passed through me.  I hope to be able to do him more justice in future drawings. 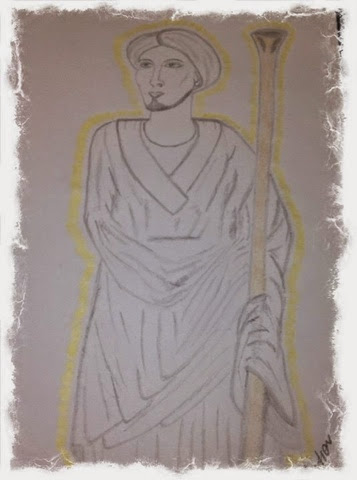 The next image that had appeared to me shortly after Serapis yesterday morning I recognised as Plato.  I'm not sure yet why Plato showed himself to me, but I'm sure I will know before too long.  While I am not that familiar with Plato, I found he was effortless to bring to the paper.  It was as if he totally gave me permission to draw him and in such a way that my style had changed almost completely.  I love his seriousness and feel I am getting to know him through his energy in this drawing. I noticed I was able to see on a deeper level when I drew him, could this be the gift Plato has given me? He is a man of words; deep profound words and as I write this I feel his energy around me, guiding me in the understanding of what he offers me.  It is not all about words, but about seeing all things from a deeper perspective.  Sometimes we do this with feeling and bring it through in words and sometimes we see this from a perspective of inner vision which in itself is a philosophical standpoint of inner knowing. I'm sure Plato is showing me how to see that which is in the hidden mysteries of the sacred architecture of inner knowing. 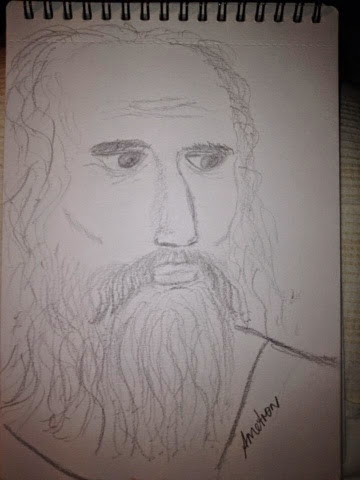 Early this morning I saw through my minds eye a very familiar image of the Ascended Master Kuthumi. Again I noticed that my drawing had taken a new direction.  Kuthumi has a warm deep and profound energy. He assists me with my understanding and encourages my intuitive thirst with numbers.  He is my master of sacred mathematics guiding me in understanding the wisdom of all that holds the sum of the universe and shows us how to understand the rhythms of life through numbers and symbology. He is my numbers man and that comes from one of his incarnations which was that of Pythagoras. 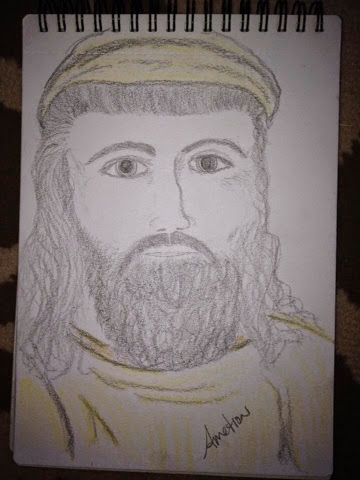 Stepping Aside so the Magic can pass through me

And then came the magic of allowing myself to open to drawing from a part of me that is other than my egoic personality.  I stepped aside and let the energy of the Alchemist de Compe Saint Germain come through.  I allowed the energy to take the drawing to its own expression.  I dare not say I am completely the alchemist with these expressions yet but, I certainly feel that I have stepped further aside so the energy, the light, and the magic can pass through me.  This is certainly not me, not this human me, the only credit I feel I can take is that I am allowing my little self to step aside and allowing greater room for my greater Self to be of service to our Beloved Ascended Masters.  I think that I, that little me may still draw as I always have done.  "Stepping aside so the magic can pass through me". This is the message I receive from de Compe Saint Germain, the master alchemist himself also known as the wonderman of Europe.  Is the gift he brings with him, the gift of truly opening to the wonder of it all?  His smile says it all. He is pleased, and he looks like he is pleased to have gotten his message through. 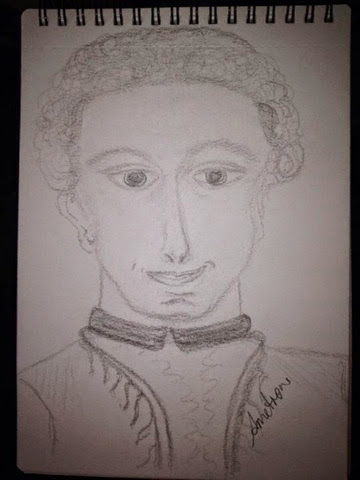 You know, this has been an amazing time for me.  Something I began to feel was that I was drawing not for me but for my Dad.  You see, I had been looking after my Dad as his carer.  Dad wasn't into spiritual stuff and not religion either.  There could be a reason for that, it could be that this life he was moving beyond religion but hadn't had the opportunity to open to spirituality so he sat on the shelf.  But, in my Dad's last 18 months, I was his full time carer and so he was immersed in my energy all the time.  I didn't ever push anything on my Dad, but when the opportunity arose I would use my understanding to hopefully help him to awaken to new perspectives before he passed on.  I strongly feel now that the Masters were coming through me, not for me but for my Dad.  I would draw them and then show Dad how good I was getting with my drawing.  All very innocent and Dad loved to see.  He would say "What are your drawing now?" and "You're getting good love".  But he got to view my depiction of the Masters and he would ask who they were.  It was a little like planting seeds.  I was able to talk to Dad when he showed fear about dying about the Masters or about things I'd read in the Tibetan Book of the Living and Dying.  He was open to listening now.  A lifetime of not wanting to know but in the end Dad really began to open up.

Anyway, these are my after thoughts, but what I'd like to offer you is a way to be able to step aside from your ego.  If you would like to step further aside then why not come in and try the online Ascension Program that the Masters guided me to bring through back in 2004 especially to help people strip away the ego centred self.  You can start with level one online or you can even come and Retreat in the Centre for Ascension in Luxor, Egypt with me.  Check out my website...

Posted by Christina Ritchie at 9:28 pm

Email ThisBlogThis!Share to TwitterShare to FacebookShare to Pinterest
Labels: Ascended Master Kuthumi, de Compe Saint Germain, getting out of my own way, incarnation of Pythagoras, master of sacred mathematics, Plato, Serapis Bey, step aside from the Ego