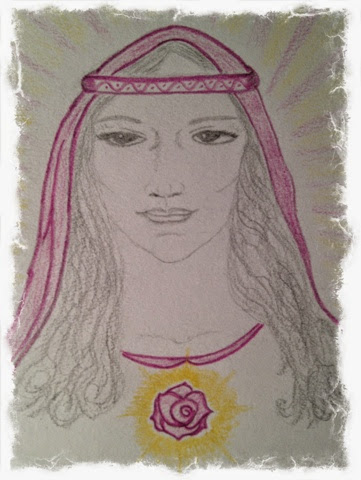 In the moments when my mind was in silence the spaces were being filled with urges to draw for other people.  Just 3 weeks ago I could not draw, but I listened to the voice from within the silence of the mind and a gift evolved and I can now not only draw but I have a desire to draw every day and visions visit my minds eye every day.  I realise that this newfound ability is not here without reason and if I am to draw there must be a purpose.  The question to the voice of silence was, is it even something I have the ability to do?  In that moment; that instant, a friend came into my mind and overlayed upon her was the image of who I recognised to be Ascended Master Lady Nada.  The vision came first and overlayed upon the vision I heard (no other way to describe it) through the silent voice was her name, "Lady Nada".  Nada, means the voice of silence and the dissolution of the ego personality into nothingness, allowing for the union with the Christ Self.  As I allowed myself to step aside from my ego and receive the message from the voice of silence, I too allowed myself to bring through an image that holds the energy likeness of the Ascended Master Lady Nada.  This is how she portrayed herself to me through the process of drawing. The drawing itself holds the energy of the Beloved Nada and as I write this I am tapping into the very highly wired energy frequencies that are transferred through from her.   I do not hear but rather receive the messages and the words more like a thought transference, a knowing that forms from a place somewhere other than my personality ego self.  I feel her deep love as I try to bring through her message which is

"to enter into and merge with the voice of silence and allow that which is beyond our understanding to filter through. Move aside from oneself in order to align with the One Self and bring the gifts that are received to the world in service to others."

Speaking in Tongues gift of the Holy Spirit

In aligning with Nada you may begin to open to the gifts of speaking in tongues also known as the languages of light that hold powerful healing frequencies that align us to the new era that is upon us.  Nada was for a long time working alongside Sananda (Jesus) on the 6th Ray of peace, love and service and is now working on the 11th Ray.  This is the Ray of Service.  It is a bridge that aligns us with the new era and helps us to balance the last remnants of healing that hold us back from fully stepping aside from our ego personality. It aligns us with the higher heart aspect that you can feel as a pumping between the heart and the throat. This pumping or palpitation is the bridge itself and you will feel it when you are aligning with the higher transformed aspect of Self.  You will begin to recognise this as what I call a crankshaft notching us up into the world of Truth and becoming the Christ Self.  Prior to this our bridge to higher worlds was that of the heart, but that was a great leap into the throat where Truth reigns and can bring with it great fear as you meet the challenges that come when preparing to talk your walk.

Now, in activating the sixth dimensional level of consciousness the Christ Chakra, which we could say, is the middle of the bridge with the first step onto the bridge to higher worlds being the heart and then, the midway section, the highest point of the bridge is the  Christ Chakra or Higher Heart and the end of the bridge arrives at the throat where we have arrived to that point that holds the greatest challenge of all and that is that of embodying our Truth.

Raising Consciousness to the Sixth Dimension

By raising your consciousness to the sixth dimension you ease the way into the Truth, the Way and the Light and the transition becomes more of a natural progression rather than than that which holds any fear in regards to owning who you truly are.  By this stage there is no other way and there is no turning back.  You have cast aside the old body.  This chakra is fully activated at the sixth dimension and from here great expansion and fully anchoring of the of the light body begins.  You are now here not for your self but in Service to others.  And as Ascended Master Lady Nada says,

"now it is time to share those gifts you have acquired along the way, there is no service leaving them to collect dust upon the shelf."

Come and Retreat with us at the LUXOR Light Retreat Centre, home of Meretseger, the Cobra Goddess of the Mountain.  Like Ascended Master Lady Nada she is known as "She who loves the Silence"

Some other information from other sites below
http://www.greatdreams.com/masters/lady-nada.htm
http://www.innerlightworkers.co.uk/ascendedmasters/mastersmep.htm
On Atlantis Nada served as a priestess in the Temple of Love. In other embodiments, she was a lawyer and expert in the defense of oppressed souls. In her final incarnation 2,700 years ago, Nada was the youngest of a large family of exceptionally gifted children. Archangel Charity appeared to her at an early age and taught her how to draw God's love from the flame in her heart and to radiate it into the nature kingdom for the blessing of all life. He also taught her to radiate it into the chakras of her brothers and sisters, so that by a heightened inner awareness they might bless others and uplift earth’s culture through the arts.
In other embodiments, Nada took up the avocation of law and became an expert in the defense of souls oppressed by the spoilers in the earth. During her meditations upon the Law of God and in the course of her ministrations in the temple, she perceived the Law "as the certain defense which the Mother must use to protect her children from the wiles of this world, from the fallen ones who seek also to use the Law to their unjust purposes.
In a dictation given August 28, 1982, Nada told her story:
"As I was embodied in a large family of many brothers and sisters of great talent, I saw how each one in pursuing his career needed love and ministration and the keeping of the flame of the sacred fire in order to be successful,
"And thus, although the choice was given to me to pursue my own career, unbeknownst to my brothers and sisters I quietly kept the flame in deep meditation and prayer as well as outer helpfulness, in [by way of] contacting the great spheres [causal body] of their divine plan, and in accelerating through the mighty Archangels Chamuel and Charity in the understanding that the adversaries of love are many, and that love is the full power of creativity, and that the success of the career son or daughter of God depends upon the defeat of love's adversary, point counterpoint.
"And therefore, in the course of defending the Christhood of my brothers and sisters, I had to advance in my own self-mastery to confront the fallen ones who attempted to thwart them in their most magnificent lifestreams and their offering to the world. Thus I understood love as the consuming fire of the Holy Spirit that does indeed challenge and bind the wicked in the way!...
"I can assure you that at the conclusion of my incarnation when I saw the victory of each one of my brothers and sisters, the fullness of my joy was in a heart of love expanded, keeping the flame--keeping the flame and knowing that I was needed, that I was essential to their victory....
"It seemed to the world, and perhaps even to my own, that I had not accomplished much. But I took my leave into the higher octaves thoroughly understanding the meaning of the self-mastery of the pink flame. Thus it was from the point of the Third Ray that I entered into the heart of Christ and saw the application [on the Sixth Ray] as ministration and service."
Lady Master Nada’s etheric retreat is located over Saudi Arabia

Posted by Christina Ritchie at 10:37 pm

Email ThisBlogThis!Share to TwitterShare to FacebookShare to Pinterest
Labels: ChristinA Ritchie, disolution of the ego, Lady Nada, languages of light, LUXOR Light, Meretseger, raising consciousness to the sixth dimension, she who loves the silence, speaking in tongues, Voice of Silence