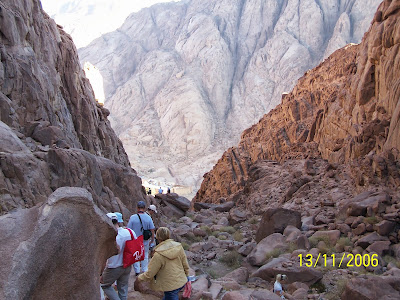 I was tired after travelling all day from Jerusalem, but I arranged a quick meal and left at 11pm for the 2 hour drive to Mt Sinai to climb Moses Mountain.  This was something that had held a special yearning inside me but I had no idea how great a challenge I was about to undergo.  It was a 3 hour walk up to the top of the mountain and I soon found it was not really a sensible idea to attempt this when I had been on the road for days without much sleep or food.  My legs struggled and I was happy to be the scapegoat for the rest of our group for the reason to stop for a rest.  Our Bedouin guide found it no effort to scale the mountain as did the Nuns from the Monastery of St Catherine’s who walked easily up passed us and then back down again before we had even got half way!  It appeared we had Archangel Michael in the form of a very fit young Argentinean who was cycling his way around the world. He offered to carry my bag to lighten my load.  Angels are everywhere over here!  I was not the only one struggling with the climb and those of us who were struggling laughed at the how we make friends through such tough ordeals.  I knew there was symbology going on again here and I saw it as my intention to climb the path of the Initiate, to meet the challenge of climbing to greater spiritual heights, after-all Moses climbed this mountain and was given the 10 commandments.  It was a relief to reach the top but hard to grasp the beauty of the sunset with so many hundreds of tourists up there at the same time, but at the top sits the tiny Chapel of the Holy Trinity.  How fitting for the close of my journey of the Divine Triangle.

The climb down proved to be even more challenging and I was not prepared for it.  3700 Steps to Repentance as they are called turned my legs to jelly as I struggled to hold my body weight on the climb down.  I lost my group somewhere along the way and I thought they must be patiently waiting for me at the foot of the mountain.  When I arrived at the bottom I walked toward the car park because there was no one in sight.  The car was nowhere to be seen.  I thought to myself, “how insignificant am I that they should jump on the bus and go back to Bishbishi without noticing I am missing?”  I waited for around 45 minutes and then spoke with the tourist police and told them I had been left behind.  They told me to wait a little longer.  I was getting anxious and insisted to the tourist police that I had been left behind.  There couldn’t have been another explanation because I was the oldest and seemingly least fit of the group especially considering my exhaustion from so much travel and little food and sleep.  One of the tourist police took me by car back up to the Monastery and lo and behold I saw someone from my group!  I felt a little silly as I approached only to find out they had been so worried about me one of the guys had gone back up the mountain looking for me.  How on earth I over took the group that were ahead of me I have no idea, but I was half an hour in front of them.  Was I symbolically lost in the desert and was this a test of faith and reminder that we are never alone?

One night I had a dream...
I dreamed I was walking along the beach with the Lord, and across the sky flashed scenes from my life. For each scene I noticed two sets of footprints in the sand; one belonged to me, and the other to the Lord. When the last scene of my life flashed before us, I looked back at the footprints in the sand. I noticed that many times along the path of my life, there was only one set of footprints.
I also noticed that it happened at the very lowest and saddest times in my life
This really bothered me, and I questioned the Lord about it. "Lord, you said that once I decided to follow you, You would walk with me all the way; But I have noticed that during the most troublesome times in my life, There is only one set of footprints. I don't understand why in times when I needed you the most, you should leave me.


The Lord replied, "My precious, precious child. I love you, and I would never, never leave you during your times of trial and suffering. When you saw only one set of footprints, It was then that I carried you.
Posted by Christina Ritchie at 11:34 am