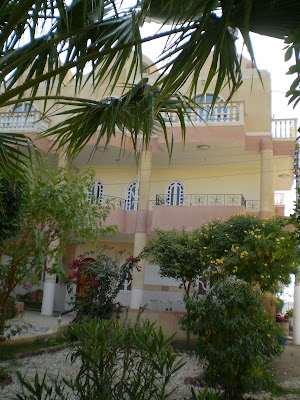 On the edge of the Valley of the Kings the beginning of a venture that will hopefully last for generations began in January of 2013.  It has taken me 7 years of travelling back and forward from Australia to Egypt and many lessons and heartache in the process.  I'm not one of those people who can say Egypt has always called me because it didn't.  That is not until 2 years after I developed the LUXOR Light Ascension Program.  It's a difficult thing to comprehend if you are not in the understanding of what LUXOR Light is, but in 2006 I was called to Egypt and I answered the call, not knowing that it would be the beginning of something that would take hold of me in more ways than one.

From 2006 until 2011 I took 3 groups a year; some were teaching programs, some were on activational tours to the sacred sites and temples. I have lived there on two occasions for 4 months at a time. I was there for 4 months over the period of the 2011 Revolution and left two days after Mubarak stepped down because my family needed me in Australia and that 4 months had been a period of deep healing and letting go of the relationship I had experienced with Egypt for the previous 5 years. All in all I had spent a total of over 2 years in Egypt getting to know the ways of the people, developing friendships that were more than likely from lifetimes past and also be sure to last at least another lifetime.

I left in 2011 with knowing that it was possible that I would not return.  I had quite probably completed my time in Egypt.   And I had in the degree that I had previously lived it.  I didn't return to Egypt in 2012.  I knew in my heart of hearts it was not right for me to be there and I needed at least a gap year to decide if I would return or not.  I fluctuated between yes and no on and off all year and then later in the year I had sneaking feelings pulling me back and by October I knew in my heart of hearts I had to return and I had to be there in January 2014. One complete year away and my next visit would not be with a group.  My next visit was to be establishing my new relationship with Egypt and what it wanted from me.

It was a different Egypt that I returned to, I could feel the changes within the people and the land and I liked what I felt.  I wanted to explore Egypt as if it were the first time I had visited and I did. The magic had returned for me and the real magic was being asked to begin the healing clinic.  And, so I did.  I went into the homes offering healing to the women and children and it was welcomed and they were eager to have me back.

Soon I had been offered to run the clinic from Nubian House in Gabawy, a house that I had lived in for 4 months in 2008.  I had a feeling back then that this place was important in my life but I did not know for what.  I run tours but the tours are not my passion.  Healing is my passion, giving to the people is my passion.  And so with the generous help of a dear friend and colleague I began the service of giving healing to those in need and although at present I am only able to visit once a year due to ill parents, it is something I will be developing for a long time to come.

My dear friend Jabir, an elderly Holy Man of Qurna who has the gift of sight although he is physically blind, had told me 2 years earlier that one day I would have a big place that would be for LUXOR Light healing and it would be important to Luxor.  This is the beginning of a project that will be a gift of the heart.  My students will take part and if I do not have groups to come, it will be me and that is perfect because the Universe provides in mysterious ways and although I have lived now without a home moving constantly every 3 weeks for the last 3 years, I have more to give than the average person.  I live in this way so that I can give of myself and I know in time I will attract others who also wish to give of themselves and together we will create an environment of the healing arts as our gift to Egypt.

My next program in Egypt is in January 2014 and those who take part will have the opportunity to work in the healing clinic to practice the skills you will be taught.

Posted by Christina Ritchie at 9:17 pm