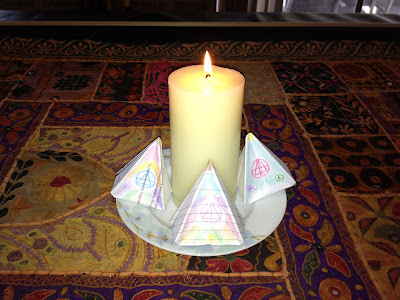 Living in the moment is something that I simply love, making decisions just on the brink of happening.   This year has been one of those years for me and the dates of 12.12.12 and 21.12.12 were two of those dates that eluded me as to what I would be doing.  I began with a plan for a gathering at Uluru only to find that I was quickly re-directed and the urge to be there then began to fade.  It’s almost like I think it and the work is already done and therefore it is time to sit in the moment and not plan, just allow it to unfold because there is yet more work to be done.
I decided that it’s been a big year for me in service so I would take those two days to mark as a holiday for me where I could lavish some me time basking in my favourite past time of meditation for the day.  Now it’s almost upon us and my plans have changed!
I was to be travelling home from Perth on the 20th and decided I would book myself in to Cervantes for two nights and witness my first sunset on the 20th in the Pinnacles Desert, have the day of the 21st then meet the sunrise in the Pinnacles Desert, spend the day in meditation and close with Sunset over the beautiful Indian Ocean.
Within two days my plans changed to invite the LUXOR Light participants that belong to our Leadership group.  With it being short notice on Janette Cochran and Narelle Pritchard able to commit and so the 3 of us are the perfect number to be setting up the trinity energy to link with the other sacred sites around the globe on this most auspicious day.
The Pinnacles are listed as an Australian Sacred Site with some stories saying the Indigenous people of Australia once believed them to be fossilised ghosts.  But they have been speaking to me (not the ghosts, the Pinnacles), almost like they are ready to rise up with ascension.  I had this feeling that each stone represents a powerful Soul/Spirit ready now to awaken on the coming waves of ascension.  Ready to be a part of the Great Shift and bring their secrets back to this ancient land.  Their stories and wisdom and codes embedded in the desert just waiting for the time when we are ready for what they have to teach us.  As old as the pyramids, they have lain secretly under the sands, then rebirthed sometime in the last century, patiently standing like Stonehenge with a great mystery surrounding them.  How secretly they have hidden their calling to me for this day and yet how obvious that if I were born into this country, into this area just 2 hours from there that it makes perfect sense that I should be in this area for the Great Shift.  With my gift of being and Encodement Key, if there are secrets to be unlocked, then yes I must wander unlocking and receiving these new codes of wisdom and allowing them to be free for all to receive.  My connection with Egypt, the pyramids and my long felt need to connect the energies of the two lands lies secretly embedded in these stones, I simply feel it in my bones!
The stones of LUXOR Light are Egyptian White Alabaster representing Alpha (God) and Australian pink gypsum representing Omega (Goddess) both the same root familyas limestone with Alabaster being of the calcite family; this will connect thetwo as I bring the Luxor Alabaster with us.
Metaphysical properties
Limestone is an assisting stone used to enhance healing properties, encourages purification, reminds us of our innocence, grounds and centres us and entices positive thoughts. Limestone is the root of many crystals including, agate, calcite, dolomite, lapis and Septarian, just to name a few. Therefore, it takes on the metaphysical properties of its additional minerals. This is why limestone is such a multi-dimensional stone, a stone of the New Era where we embrace our multi-dimensional selves.
Like standing stones and like acupuncture needles into the land, ready to awaken the codes of purification, healing and innocence as we move into the new world rebirthing into purity, the sacredness of this site and our intentions to be there in the quietude listening to the whispers of silence and the sounds of Truth is already stirring feelings of joy and bliss within my heart.  All the names registered on my list will be coming into the Pinnacles with us, to receive the codes and healing that will come through on the day.  Any encoding or Sacred Sounds will be recorded and shared with you all.
On 12.12.12 all the names that were registered to flow effortlessly on the waves of ascension were written on two pieces of paper which I folded into origami pyramids.  Then, I decide to do a third pyramid to represent all the names that would have like to have been registered and anyone else that is connecting with us from wherever in the world.  I placed them beside the new candle that burned for 24 hours from 12 am on 12.12.12 to 12am on 13.12.12.  At 12am on 12.12.12 I went into meditation and recorded the messages that were appropriate for the energies of the day and from the time I began recording to the time I finished it was 22 minutes exactly.  Big thing happen under the energy of the 22 which represents having gone full circle and beyond earthly considerations and into the state of mastery where we now use our physicality with reverance and respect.
I look forward to sharing more with you as we enter the New World.
Back to LUXOR Light
Like us on Facebook

Posted by Christina Ritchie at 8:11 pm