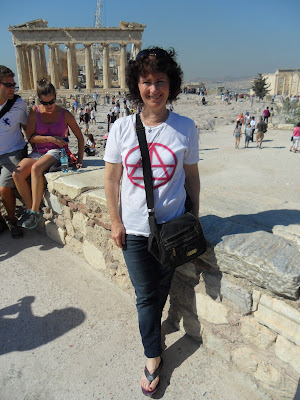 My time in Greece is nearing an end, with only two days to do.  This is the first leg of the journey for the  LUXOR Light Peace Project that will move through Greece, Israel and into Egypt where a group will gather together for an ascension tour for 11.11.11 and on.
The main reason for coming to Greece was to visit the Parthenon and so it turns out that it was also to be significant to unite the purpose with the Temple of Poseidon.  All else was simply to be a bonus.
The Parthenon was built in dedication to Athena, Goddess of Athens and also to Poseidon.  Athena and Poseidon used to vie for the most important status or some sucharather.  Anyway it was clear to me on first knowing about the expressions of battle between chaos and order were depicted on the walls of the Parthenon that this was the perfect time to be visiting it and it made absolute clear to me the significance as we leave this world of chaos in order to enter the new world of order.  It is paramount that we each leave the chaos behind us now and deal with things in a different more peaceful and orderly way.
As it turns out I tried to visit the Acropolis and the Parthenon on the 5th October but it was closed due to a strike and protests happening outside Parliment house in Athens!! (Chaos)  Ha how significant that I should be here at this time.  So I was delayed and had to revisit the next morning trusting the strikes would be over and I would be able to enter.  Oh yes I was!  The date was 6.10.2011=29/11 just to show the significance of the 11 energies we are working right now and the global awakenings that are happening. I had hoped to find a quiet spot to sit and meditate but that was not possible unfortunately so I wandered on and decided to take a trip to Sounion to the Temple of Poseidon.  I had been struggling with making decisions to what else I wanted or needed to do.  The temple of Poseidon seemed to be calling, and now as I write this I realise why.  I had a vision earlier on this year, it was in relation to a message from Arch Angel Gabriel.  He showed me the Parthenon (I didn't realise it was the Parthenon at the time I simply knew it was a temple in Greece) and at the end of the Parthenon sat an enormous God like being who I thought was Serapis because he usually shows himself to me depicted looking like King Neptune.  Some weeks later I was on the internet and just happened to come across a picture of a temple that looked the same as the one in my vision - I had full recollection at that point of the vision.  It was the Parthenon, and not long after that all came into place that I needed to visit Greece.  Now I had no idea but was soon to find out as I visited the Temple of Poseidon that he and Athena were always at battle in regards to who would be the main God of Greece.  I'm not much into history and find I stumble upon it only after being drawn by energies.  As it turns out the Temple at Sounion is dedicated to Poseidon but also to Athena.  It goes like this - Parthenon = Athena and Poseidon and the Temple at Sounion = Poseidon and Athena - exact opposites and not only that but it is the God and the Goddess and the battle of the masculine and the feminine powers.  Now it all made sense and there really is no need to have to visit anywhere else unless I have time and inclination.  I do have inclination but my mission is more important and so my last two days in Greece are dedicated to doing the Soul Connection healings for those who have requested Greece and for the healing of Greece.  LUXOR Light is fully anchored here now and the liberation can begin.  I also see now that it was Neptune/Poseidon that was sitting at the end of the Temple as always happens my Greek God managed to get me to the right places.
I call upon all LUXOR Light people to dedicate some time to sending love and healing to Greece over the next couple of days while I am still here so we can unite as one for a more powerful healing.  And all others who are willing , please join with us and let us give of ourselves for the betterment of humanity at this mighty time of Awakening.
Thanks for being a part of the journey with me.
You can view my photos with the following link
https://www.facebook.com/media/set/?set=a.10150845612140608.746158.740370607&l=bfab43a180&type=1 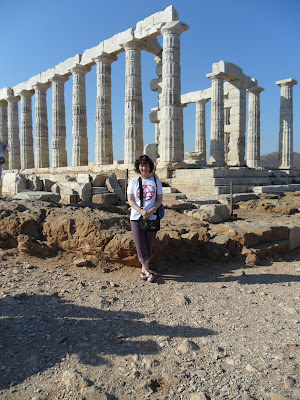 Posted by Christina Ritchie at 7:50 pm