We took Kalesh's to make our way to Edfu Temple after meditating on the dahabieh in order to clear the chaos within allowing us to accept the changes offered through Divine Law. 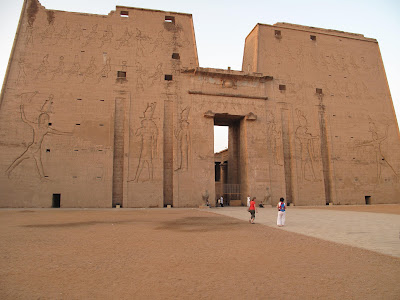 Horus is our champion for today as this temple is his temple.  Horus represented by the falcon was originally the sky god, whose eyes were said to be the sun and the moon.  The child of Osiris and Isis, he avenged his fathers death after Osiris was slain by his evil brother Seth.  After this great battle, Seth was exiled and  Horus then took the throne.  From then on, with Osiris reigning through him from the underworld, all Pharaohs thereafter proclaimed to be an incarnation of Horus, the "living king."
The above picture was taken in Holy of Holies room, which is the most sacred area of the temple.  In the background you can see the granite naos shrine which originally contained the cult statue of Horus.  In the foreground of this sanctuary you can see the barque (Ark) of Horus, a reproduction of the original.  This barque would have been joined with a second one that belonged to Goddess Hathor as she travelled from Dendara every year to remarry Horus in an annual ceremony proclaiming their love for each other.

And so if you have cleared the chaos, would it not be possible to welcome Divine Love into your world? 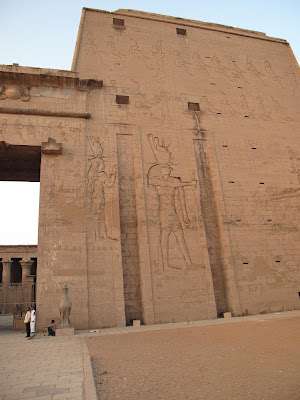 One of the rooms that was of particular interest to me was the Alchemy room.  It was difficult to get a photo that showed clearly what the room was used for, but the energy for those of us that work the the LUXOR Light Alchemy Waters was clearly evident as activations began spontaneously.

The fact that the we had arrived at the Alchemy Room triggered something inside me.  I felt "it must be a sign" hehehe, and sure enough it was soon to show that I was being prepared for my next personal little mission along this journey..........
.........to be continued

Posted by Christina Ritchie at 11:52 am