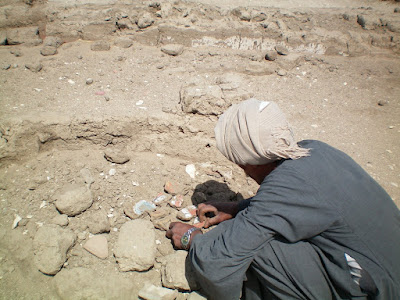 1.4.2009=16/7 but a personal 22 day for me. 22 is my life lesson and also the mathematical equasion of the LUXOR Light symbol, the number of initiations in the LUXOR Light process and has always been the main number that comes through for the LUXOR Light work.
I knew that today I had to do something special, something that could allow for the big to come forth once again, and so I was lucky enough, visit a temple and palace that is not frequented by the tourists.
As I wandered around the temple of Akhenaton, (Malqata) I was a little disappointed, not in the fact that the temple was only rubble, it never bothers me about how much there is to see because I don’t go for that reason, but for the energy. It was certainly stillness, but I had been guided to make some encoded waters and I wasn’t feeling like this was the place. I took some photos was gifted some relics, and then we wandered over to the palace. As we were turned in the direction of the Palace of Tiye, I could feel the energy building, and by the time I stepped inside the boundary of the Palace the encoding had begun. I walked slowly as the codes began to come forth and I “knew” that this was the place I would need to make the waters.
We went to have tea with the temple guards and then I went back alone into the compound of the Palace and walked around the area while making the waters. This was the home of Akhenaton, Queen Tiye, and where Tutankhamen was born. Now I understood why the energy was more intense here. I thought it would have been the temple but was unaware that I would get to step inside the grounds of the Royal Palace.
Tiye was mother of Akhenaton and perhaps her biggest effect on the history of Egypt was being the mother to the heretic king Amenhotep IV - later Akhenaton. It is thought she may have encouraged he son to follow her religious yearnings no matter how controversial they were.............she sounds like we would have got on just fine. Maybe Akhenaton inherited his mother's strong personality and this gave him the strength to go on and revolutionise the religion of Egypt.
It is thought that Akhenaton married his mother and she is the mother of Tutankhamen. Anyway, I will give more information on the purpose of the encoded waters in upcoming postings, but the Name of the Waters are Dara ma Tiye............this is the language of Hibiru and I was surprised although I should not have been when her name poured forth in mantra fashion as I walked among the ruins..............
We continued on to another small temple of el Shalwit but it was not significant for me.
Posted by Christina Ritchie at 3:54 am