KEYS of Ascension on the Nile 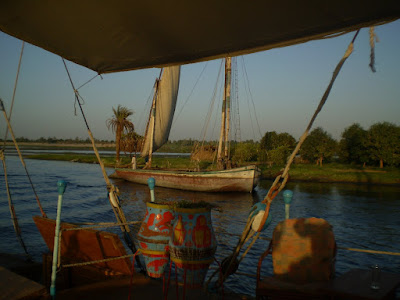 Insight, Adeptship, Intensity, wisdom with reason, conviction, heroism, self control, discipline, controlled and focused energy, impeccability............this is the energy that comes under the 44 vibration, along with the ability to tap into Higher Mind.
This evening will be a prelude to capturing the Intensity of the work we have done on the Nile and the work coming up in Luxor.
Two more participants have now become activatory and have opened to the Higher Mind and began the language of Light. The KEYS on the Nile has proven to be a very powerful process that has the ability to fast track to accepting the Holy Spirit/Holy Shekinah, and so as I bring the new codes back to Perth, we will begin with an evening on the Night of the 24th, and a full day intenive on Sunday the 23.11.2008=44. To take part in the full day intensive you must also take part in the evening of the 24 October. Those who have taken part in Egypt are exempt from the 24th October.
Please register your interest and I will see you on the 23.10.2008
I will be available for healing sessions from Tuesday 22.10.2008 if you wish to be up coded.

So far the trip has been incredible. We have finished the trip on the Dahabieh cruising the Nile for 5 days to Aswan working with the KEYS of Ascension. It was hard to believe we were doing such a magical thing.
The first evening, Sue and I stayed up on deck until Midnight and on the West Bank of the Nile we could see 3 pyramids, almost identical to the 3 pyramids at Giza. They looked to be of stone, just like the Great Pyramid in Giza. It was amazing. We joked that it was probably a pile of rubble that would not be there in the morning, but in the morning, there was no pile of rubble, in fact there was nothing. We were seeing through the veil. As we sailed on that morning, on both east and west sides of the bank, the skyline held cyrstaline pyramids that we could see sparkle as we sailed. Our driver had said to us before we left "Clap your hands and ask Abdul to take you to the magic city of Atlantis".......... we believe this is what he was talking about. Atlantis can be anywhere when you see through the veil. This was a magic I never thought possible.
I am hoping for some time for some more updates, but I am really busy working, I have been given a desk in a travel office to work at and free accommodation by the owner of the boat, along with mobile internet... also a gift.... I share this with you to show you that we are looked after in every way when we do this work, so that it is possible to achieve the work of Spirit. LUXOR Light goes to new heights and I urge you to tell your friends to see the new teachers and begin the courses. There is nothing to compare with this energy on the planet today, and where it takes you is a living dream.
I was talking with Abdul, the man who owns the Dahabeih, as he was asking about our work. I thought that maybe the crew on board the dahabeih may have told him we were a little crazy, with all the activating etc, and he told me that many Muslem people understand what we go through. He said that when they take the pilgrimage to Mecca, it is said that this one day is when God will empty all the negative from you and you begin clean again like you have been reborn. He said many strange things happen to the body, things that you can not pretend to do, and much crying. This is the same thing he said, so many of us already know what you do. I then realised that the Christians experience the same thing when the Holy Spirit enters the body, it is just that it happens constantly to us and not just on a day here and there. I saw a similar thing happening at the wailing wall in Jerusalem, and the Jewish guide we had to wander through the tunnels underneath the Old City had to keep stopping his had from activating.....................
This shows us that the ever constant growth we are offered to move beyond the norm, and into Mastery at such an immense rate. Little by little we are shown, the story of what we do. Please don't underestimate what we have here and release the fear and welcome the Wonder of Spirit.
I will also be teaching the LUXOR Light course as an intensive on location in Luxor in 2009, either January or April, if you know anyone interested please forward this on. This will be a 10-11 day process including the practioner levels. You will need to be well prepared for this level of work.

The KEYS on the Nile will be offered again in October 2009, registrations begin now.
Posted by Christina Ritchie at 4:23 pm