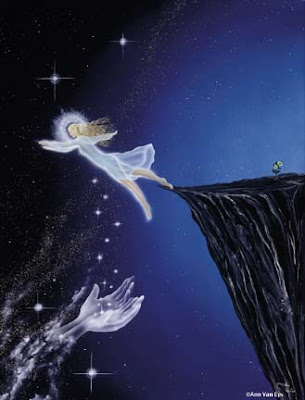 Last night, our final evening of the 999 energies.........wow, have I ever found my voice, it gets stronger and stronger as these energies flow through me. And this morning I have already received 2 emails from 2 people that didn't attend to say how they had felt the energies at the time of our gathering. How exciting for the things to come and what a clean up we have had this month.
For myself, my son totalled my car and like Karen Bishops daughter from Whats Up on Planet Earth, he was so totally in love with my car. If he had totalled his own, it would have had no effect on him. He is grieving the loss on his first love........my car..hehehe. And me, well it's just a car........he's waking up! But he did start to relax a little some 4 days down the track, so spirit gave him another wake up call..........and he hit a brand new Mercedes....... well the owner nearly killed him and he can see the debt he has put me in/him in/ us in.... we are a family. And how can it get better than this...........he has a job!!!!!!! Started this morning, finally. Something good really has come of this.
I had a dream the other night which showed me breaking and the car just would not stop and it slid and slid until it went over the edge of a sheer drop. I could feel myself falling falling falling, and I said to myself "well I guess this is it, I will have to trust that I will be safe"..........and then I thought, "no, I have to do something", so I jumped out of the car, and I landed on soft white snow............ahh spirit saved me. On one side of me was a military fighter plane and the other the black slippery tarmac. I looked up and saw that I had been driving on the tarmac and it had a sheer drop down and off into the deepest of oceans........ I thought to myself, "lucky I jumped out, there would be no coming up from there"......... I looked up at the vertical climb of slippery black tarmac and thought, "well that's the way up, I guess I better get on with it". The dream shifted and I was sleeping over my ordeal, and the phone was ringing. I could hear it but ignored it and my son answered the phone and told them I was sleeping. He passed the message on to me, but I could say that after my ordeal he really was looking out for me and seeing that I got my rest. I knew this meant that after all the dramas he would one day look after me. Two days later my son had his second accident and I see the climb I have, but I also see the good that has come of it, and I feel strong and clear that all will be well. Something had to give, he wasn't getting the message, it was taking years and years and years........ho hum. But now I think the September 999 energies have sorted it out. I took a quantum leap in that dream... not the way I thought my leap would be, but I know my fun leap is still coming and I'm ready and willing. I'm planning a relocation to Egypt in the New Year, and a 6 Day Intensive LUXOR Light in Luxor in March. If it goes ahead I really will be in my sweet spot. I have no car, I have no home....... nothing keeping me here ......... nothing I can't sort out. I'm ready... what about you?
Last night some of the comments were of the feeling of being totally emptied out......... fantastic!!! yeeeha let's move forward into the new........October a 10 month - new beginnings 10.2007=19/10, still a little releasing to do but all in all the foundations to the new.... stay tuned for some more work to help release the last of it................
Many many LUXOR Light blessings to you
Posted by Christina Ritchie at 8:21 am